Image by jorono from Pixabay

If you didn’t think Jamaica was a special county, then this article would make you think differently. Upon researching these facts, some of them I remember learning about in school when I was younger. Others, I have heard my relatives say in passing but never truly believed. Although a small little island in the West Indies – “wi likkle but wi Tallawah”.

1. The colours of the flag do not include any of the colours on the USA flag:

If you truly think about it most countries flag in the world, they do contain one of these colours. You will notice whenever watching the Olympics with the winners running around the track with their countries flag blowing in the wind. Many of them have similar colours or have a colour that matches. Jamaica is one of only two countries worldwide that does not include blue, red, or white. The other country is that of Mauritania. Surprisingly months before our Independence they were submissions of many flags that did contain the colour “blue”. However, the committees responsible for the selection of the flag decided not to go with those.

2. The colours of the flag mean something: GOLD

Heroes day which is usually held in October in Jamaica was a day we celebrated our national heroes. As well as, the national symbols of the country which includes the flag. Every year like clockwork we would be reminded of what the colours mean. The yellow represents the sunlight that bestows upon Jamaican for 365 days of the year. We’re in the Caribbean as such we experience a tropical climate. There is more sunshine and/or warm days than there are cold days. Also, the gold represents the wealth of the country. Although people may think that “We live in trees”, there is much abundance on this little island.

3. The colours of the flag mean something: GREEN

Next, we were taught that the green represents the abundant greenery of our land. It was more so specifically referring to the agriculture resources. For example, dasheen, cocoa, green banana, pumpkin, cassava, sweet potato, soursop, ackee (mentioned in our last post), coconuts, and so much more. The list is endless of the numerous ground provisions grown in the country and sold islandwide. A lot of people have said that Jamaica doesn’t have as much as it uses to. However, if you go to the countryside in the words of Protoje “And food deh down a country just a drop off a di trees dem”.

4. The colours of the flag mean something: BLACK

Now younger me was very intrigued about what the “black” meant when I first learned about it because the other colours seemed self-explanatory. The black represents the strength of the people of the nation. This includes our ancestors, forefather, the diaspora, and even the current residents. We’re a set of strong people and creatively inclined. The Versuz show that had Beenie Man and Bounty Killer was the most viewed Versuz showed to date. The music, vibes, and joy that these two artists brought during quarantine using our music was an unmatched feeling. And if you missed it, you could always go back to watch it.

5. A competition was held to select the “BEST” FLAG:

The year before we gained independence, a competition was held to select the “best” design for our national flag with a reward of 100 pounds. I am assuming that was a lot of money back then which would have made me want to entire even though I have no artistic skills. After 368 entries were received, 12 were shortlisted and none of them made the cut.

It was a big change as the committee saw it fit to let Jamaican’s see the “black” on the flag in a positive and optimistic view. If you think of the colour black, you usually associate it with horrible things, for example, hardships faced in slavery, colourism, etc. This is well explained in Chronixx’s son “Black is beautiful” as he says, “they never told us that black is beautiful”. In 1996, the Hon Rex Nettle ford chaired the committee to adjust the “national interpretation” to benefit the future Jamaicans like myself.

7. The flag is raised every morning at 8:00 am and lowered at sunset:

I attended Ardenne High School (Optima!) which started at 8:00 am. If you got to school right in time, you’d see the cadets in their uniform marching out to the pole on the campus grounds. And in a truly professional manner, they would raise the flag at 8:00 am sharp. As well as, if you stayed back at school late, you would also see them lowering the flag. When I first attended Ardenne, I never really understood why they were doing that. So, I asked one of the cadets I knew at the time who informed me thoroughly.

8. The Jamaican Flag should never be used to drape the coffin of a non-national

When the late Honourable Prime Minister Edward Seaga died in 2019. His coffin draped with the national flag was carried all around the country to “visit” in each parish. If you watched the news during that time, I thought it was weird at first. However, now I know that it was protocol.

9. The flag was first raised on Independence Day:

I would always ask my father to remind me of what happened on Independence Day (born in 1952). He remembers mini flags being delivered all around the community and at school to prepare everyone for the “independence” celebrations. I always remember that story because of what a feeling he must have had to be a part of history itself. And everyone else who was grateful to no longer be under Britain’s rule.

10. The flag is to never touch the ground:

Although this is an interesting fact, it is a rule across all countries. The flag is to never touch the ground which I remember clearly. If we had mini flags at school, watched the cadets raise/lower the flags, or watched official national ceremonies on tv, the flag was handling with a lot of care.  It is considered the prize position as it is the national emblem of the country. So, whenever you wave your flag a yaad or abroad, do remember to never let it touch the ground.

I hope I was able to provide you with unique information about the Jamaican flag. I got goosebumps just typing it myself and reading it over. Not only is the country a beauty itself but so is the flag. So, wherever you reside in the world, “yaad’ or abroad – don’t forget to wave your Jamaican proud and loud for everyone to see. 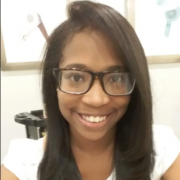 Ashley is a born and bred Jamaican of 24 years old. She currently enjoys listening to music, going to the river and eating KFC. She is an accountant by day and a freelance artist by night.