Image by Ian Lindsay from Pixabay

During the apartheid regime, South Africans were divided into their ethnic groups as a means of creating severed relationships among each other and to steer away from coalitions forming against the government. Partly as a result of this, each ethnic group established their own culture, tradition and language, while some traits are quite similar, you will also find that there are traits that differ. It’s in their heritage that one can appreciate the beauty these 7 ethnic groups all contribute to form part of the identity of South Africa. This article will highlight the most interesting attire from some of the tribes in South Africa.

Zulus make up the biggest population in South Africa and are probably the most recognised South African tribe around the world because of their historical leader, Shaka Zulu. This tribe places certain meaning in attire which unlike conventional Western clothing gives it more significance.

For women, traditional wear is determined by age. As unmarried adolescents, they are expected to have a bare chest which means that their breasts are often uncovered during traditional ceremonies. Her waist is covered with a beaded skirt or animal skin and sometimes her shoulders will be decorated with a beaded necklace. An engaged woman will allow her hair to grow and have her breasts covered with a decorative material to respect her future family. Once a woman is married, however, her body is expected to be covered completely which indicates that she is unavailable. She can wear cowhides, beads, hats and decorative skirts to endorse her marital status.

Zulu men wear animal skins and feathers, the kind of skin that is used is determined by the man’s status. Aprons made of calf-skin are worn to cover their buttocks and are referred to as ‘ibeshu’. Young men wear short aprons so that they can fight and hunt while older men wear long aprons to indicate that they will not participate in th0se activities. Married men are identified by wearing headbands.

The Xhosa tribe is recognised for its clicking language, many of the words require one to move their tongue in extraordinary ways to form words. While their language is impressive the same can also be said about their attire.

There are similarities with the Zulus, as a lot of what they wear is also determined by their age or status. In this case, the skirt is what determines the age and status. Women who are unmarried and have children wear a skirt or dress that is below the knees, while unmarried adolescent women wear shorter skirts. A bride, however, wears a skirt that is of ankle-length to once again indicate that she is taken. Once she is married, she wears a blanket around her shoulders.

Sotho people are well known for wearing blankets during traditional ceremonies. The unisex blankets come in different colours and patterns thus giving them a sense of uniqueness. Not only do they serve a traditional purpose, but they are extremely practical to wear in the wintertime. The history behind them stems back to 1860 when King Moshoeshoe received a blanket as a gift from Queen Victoria. From that day on, it became embedded in their culture and tradition.

The Tsonga tribe found in the northeast of South Africa is an amalgamation of many tribes and was formally established when Soshangane was told to conquer the land for Shaka Zulu but found himself appreciating the landscape and people so much that he became its leader. Although partly descending from the Zulu tribe, the traditional attire of the Tsonga people has very much evolved in its own way.

Tsonga people are known for wearing bright fluorescent clothing with flowers forming part of the decorative cloth. They wear the decorative cloth over their shoulders and around their waist and it is not uncommon to find them wearing more than one cloth. However, it’s their skirts that really steal the show, in their language, it is known as a xibelani. It has multiple forms of decorated fabrics with beads adorning the edges. It is designed with ruffles that move with rhythm and rigour as the Tsonga women dance. It is truly a sight to see!

Much like the Tsonga tribe, Pedis are also very expressive with colour. Their colours are bright and are often mixed. These colours represent the joy that is attached to their culture and there is no denying that when you look at it, it makes you feel giddy. There is a range of skirts and dresses that women can wear, that like a lot of the other tribes, are decorated with beads. To accessorise they wear doeks to complete the look. Pedi male attire is unlike the other tribes because it has been influenced by the Scottish. There are many theories that could explain the Scottish influence seeping its way through their tradition, however, the fact is, the Scots have competition when it comes to pulling off a kilt because the Pedi men look just as good as they do!

The name, “Swazi” came about in 1839 through the influence of the king Mswati II. Similar to many of the other tribes, their traditional attire is determined by age and status. However, there are certain traits that make this tribe stand out, for example, their infants of up to 3 months wear protective medicines only. Eventually, the boys are entitled to wear loin skin while females have a string of beads, skin or a grass skirt to place around their waist. Once women begin to reach their adolescent years, they place a short toga of cloth and beads around their neck. Unmarried men add cloth and beaded ornaments to their attire, whereas unmarried women wear dresses and place their hair up in a bun. Married men do not change their appearance but married women have to wear a skin apron and skin skirt.

The Ndebele tribe is not only situated in South Africa but also its neighbouring countries of Botswana and Zimbabwe. They are well known for their geometric designs and beaded and copper accessories. The women wear beaded aprons and as one gets older, they are able to place copper rings around their neck, arms and legs. The Ndebele men place beaded breastplates or animal skin around their neck. 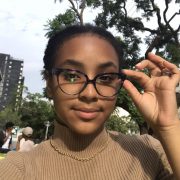 Gabrielle is a 20-year-old undergraduate student studying publishing. In her spare time, she likes to write about the topics she is passionate about to share to the world.