I tell everyone I meet that they need to go to Trinidad’s Carnival at least once in their lives. It’s an absolute must-do, even if you don’t participate as a masquerader, it is quite a spectacle to behold.

It’s more than just a massive street or block party; in fact, it is not. In Trinidad, we say, “Carnival is woman!” and while that is true, there’s a profound and rich history that makes this event so incredibly special. If we’re being completely honest, Trinidad’s Carnival is the blueprint for all other Carnival festivals across the globe, with none being close contenders.

Naturally, I am biased because this spectacular event happens in a country very dear to my heart; the place of my birth, the sweet twin isle where I was raised and miss so tremendously (thanks, COVID).

Assuming you know much about the history of the Caribbean, you’ll know that Trinidad and Tobago have been occupied by the Spanish, Dutch, British and the French, bringing with them a mélange of influence to the twin islands. However, to be more specific, Carnival stems from the French occupation dating back to the 18th century.

How did Carnival come to be?

To mark the beginning of the Catholic Lenten season, the French planters, and the freed slaves (also known as free coloureds) would host extravagant masquerade balls and festivities which the slaves were not welcomed to participate in.

Initially, the slaves created their own festival in the form of ‘Canboulay’ (a derivative of the French term ‘cannes brûlées’ or burnt cane) to mark the sugar cane harvesting season. Once they were emancipated, it became a form of rebellion, with the use of masks to mimic the French and their masquerade balls.

It later evolved into something greater with the African influence of stick fighting and drumming which stemmed from the African-based religions that were once suppressed by the slave owners.

When is it celebrated?

Following the Catholic calendar, Carnival is always the Monday and Tuesday preceding Ash Wednesday. Basically, we sin our lives away on Monday and Tuesday in our barely-there costumes while consuming copious amounts of alcohol and then repent on the Wednesday. Seems like a pretty sweet deal to me.

Understanding the timeline in which Carnival occurs is understanding that Carnival is in fact a season. Starting during the summer with band launches where bands present their costumes to the public, Carnival is pretty much on our radar for about half of the year.

Keep in mind that these band launches happen in the form of many fetes because Trinis love to party and what better way to welcome the upcoming season than to throw a massive party with Soca, rum, and gorgeous costumes.

When we say, ‘Carnival is woman’, this is what we mean. These launches are of utmost importance to the women who adore Carnival because they are getting a preview into what costumes they could potentially be wearing come Carnival Monday and Tuesday.

Once Christmas is over, Carnival is in full swing, with radio stations instantaneously switching from Parang to Soca; and it is literally all we hear up until Ash Wednesday because while we are party people, we are also respectful people.

Here’s a breakdown of the season:

1. Band Launches – July/August and sometimes September if bands are running behind schedule

2. Soca Music – released and promoted throughout the course of the year. This is crucial because people need to get familiar with the tunes that they’ll be whining and jamming to on the road.

3. ‘J’ouvert’/’Dutty Mas’ (Creole for ‘jour ouvert’ meaning ‘the opening of day/day break’) – starts at 4 am on Carnival Monday morning with bands meeting around 2 am ready to party in paint, mud and/or powder while dancing to the sweet melodies of Soca music.

4. The main event – Carnival Monday and Tuesday – bands meet up around 8 am (if you survived J’ouvert) to parade through the streets of downtown Port of Spain. On Tuesday, bands meet up a little earlier (around 6 am) which is the day that they are judged because yes, while this is all fun and games, it is in fact a competition, and crossing the stage is the epic highlight of the day.

5. Ash Wednesday Cool Down – this is usually spent by a body of water or in our sister isle of Tobago (Trinidad is where we work and play hard, Tobago is where we go to wind down) provided that your parents didn’t make you go to school (Convent girls stand up) for Catholic Mass or if your boss didn’t make it mandatory to come into work (because suddenly rules come back into effect.)

N.B., I think it’s worth mentioning that Carnival Monday and Tuesday are not public holidays; people just don’t go to work, and it’s pretty much understood whether you’re playing mas or not. If laidback were a people…

When the slaves created Canboulay, it was initially to mock their owners but then they started to incorporate some of the culture and traditions that they had been stripped of. Some of the more traditional Carnival characters were Dame Lorraines, Minstrels, Moko Jumbies, Pierrot Grenades, devils and sailors.

Nowadays, Mas looks very different. Costumes are mass-produced in China, skimpy and sexy bodywear is adorned with beads, feathers, and glitter. There are different sections that a masquerader can be a part of. You have section leaders being the most expensive costume and front line and backline costumes. Being part of a band means that you pay for an all-inclusive experience: costume, alcoholic beverages, food and security and band owners have managed to market this to perfection, attracting thousands of people from around the globe and gaining their loyalty and respect.

Carnival has turned into a true economic empire; a money machine for the 1% in Trinidad who has managed to turn tradition and culture into real capitalistic profit.

Some would say that this was the 1%’s way of marginalising classes and making the Carnival experience only accessible to a selected few. By driving prices of costumes up and making the experience exclusive, it can perpetuate the narrative of ‘the other’, which may make some question how far off we are from pre-emancipation days.

But like Barbara Ehrenreich said in her, ‘Up Close at Trinidad’s Carnival’ essay,

“A teenager planted himself in front of me and announced that I looked “too nice”, a condition he corrected by gently anointing my face with fresh paint. I don’t know the origins of this orgy of body-painting, and I am glad I hadn’t joined one of the Jouvay bands that use chocolate or mud instead, but I know its effect: race was dissolved; even age and gender became theoretical concepts”; and the same goes for class because even if this is the 1%’s intention, to divide; it is erased by the jovial atmosphere that brings people of all creeds and races together.

Trinidad’s Carnival has its origins in an extremely dark history, but its reach is wide and has power in that it sheds light on a history that is often disregarded by nations where these perpetrators came from. So, if it can bring people of all nationalities, races, classes, genders, and sexual orientations together and teach citizens of the world about a history that is often swept under the rug, then I’m okay with that. 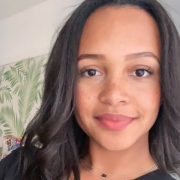 Julia is a 9-5 professional for an international organisation in New York City by day and blogger and content creator by night and wherever else she can squeeze her other passions in between. As a proud Trinidadian, avid traveller and foodie with a penchant for skincare and beauty, Julia explores the world by writing about these themes.