When it comes to UK entertainment, we know how to create a gripping drama, amazing film and nail-biting TV series. There is some amazing talent that comes from the UK. Behind the screen, the UK has produced a pool of talent that have not only played characters in British film and TV but captivated audiences across the world in international projects. Black UK actresses have been killing it! From recognisable faces that we know and love to up and coming black actresses that are putting their stamp on things, the list continues to grow!

Here are 10 of the most popular black British actresses.

Born in London, Thandie Newton made her debut in 1991 and has continued to thrive starring in UK and international films such as the Mission Impossible franchise. Earning a BAFTA for her role in Crash, she went on to play memorable roles such her part in The Pursuit of Happiness alongside Will Smith and in the classic comedy Norbit and Eddie Murphy’s love interest. Thandie also had a major storyline is one of Britain’s most-loved series Line of Duty where her storyline left viewers on tenterhooks! From comedies to action and drama, Thandie is one of the best British actresses on screen today.

Instantly recognisable, Sophie Okonedo is one of Britain’s most accomplished black actresses. Her debut role alongside Jim Carey in Ace Ventura: When Nature Calls is a poignant part of her career but she didn’t stop there. Sophie truly came into her own during her 2004 appearance in the historical drama film Hotel Rwanda, winning a Black Reel Award for Best Actress for her role. Secret Life of Bees, After Earth and more recently 2020 Netflix series Ratched, is just a small selection of her amazing filmography not to mention a long list of voice work.

Despite starring in small roles since 2006, Wunmi has become an up and coming Black British actress especially on UK tv screens. Her many supporting roles crime favourite Luther, channel 4’s The End of the F***ing World have made her a recognisable face. In 2020 she showcased her talent in film. His House explores the very real horrors of the asylum experience where Wunmi’s character has an increasingly supernatural journey with her husband. Again, Wunmi’s performance showed exactly why she’s one to watch in the world of TV and film!

Did somebody say, Moneypenny? Naomie Harris is the first black British actress to play the character of Eve Moneypenny is James Bond in 2012, again in the 2015 and is said to be in the upcoming 2021 film too. Naomie says that her debut role was Moonlight, that ended up winning an  Academy Award for best picture and Harris’ performance as Paula, a drug addict and mother, earned her a best supporting Oscar nomination. However, Naomie explained that the film broke her career rule which was to only make films with positive depictions of black women. But Naomie has gone on to play amazing roles as she continues to grace our screens.

Starting her career with guest roles in some of the UK’s classic shows such as Casualty, The Bill and Crossroads, Freema later TV role made TV history as the first black female assistant in Doctor Who her character as Martha Jones. She made her screen debut as Martha on 31 March 2007 and continued to portray the character Martha throughout every episode of the 2007 series. Since then, Freema has worked on various projects such as kids TV, Netflix series and Britsh TV programmes.

If you haven’t watched Bridgerton, the show that’s taken Netflix by storm then where have you been? Adjoa Andoh who plates Lady Dunbury is one of the main characters in the show and does an amazing job among the other black leading ladies. Over the years Adojah has appeared in a number of British series and is best known for her parts on the stage, particularly with the RSC. Her filmography has included some of the best plays and TV features that we know and love!

Top Boy, Riviera and Doctor Foster to name a few, are some of the top roles that Clare-Hope Ashitney has taken on. We’ve seen her faces around over the past decade in many different roles including across the pond such as Austrian film Black Brown White, which won her a nomination for Best Actress at the Austrian Film Academy Awards. More recently, she had a main role in Seven Seconds a Netflix crime drama also starring black actress Regina King.

Taking it all the way back to old skool British TV, Angela Griffin is recognised from classics such as Waterloo Road, Holby City and Coronation Street making her a well-known actress on our TV screens. She’s also made her debut in a number of Netflix shows that you may recognise her from. In 2019 played Astrid alongside Idris Elbra in Turn up Charlie and in 2020, White Lines fans will know her as Anna. Her varied roles make her enjoyable to watch in everything she does!

Creator and star of E4’s Chewing gum, Michaela was an instant hit and won the British Academy Television Award for Best Female Comedy Performance in 2016 and a BAFTA for Breakthrough Talent for writing the show. Her role as Tracey instantly captivated the audience and she had rave review all round. As well as being the face of Bubblegum she also wrote, co-directed, executively produced and starred in BBC’s I May Destroy You. Michaela’s performances and work have made her instantly recognisable on British TV and who knows what she’ll do next?

Clearly, black British actresses have made a big impact in the world of TV and film and show no signs of stopping. Lookout when you start your next series or tune in to Netflix, you might spot one of these amazing actresses or discover more up and coming women that make your favourite programmes even more enjoyable! 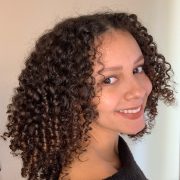 Olivia is 24-year-old writer from South West England. She is a full-time copywriter, freelance writer and natural hair blogger.